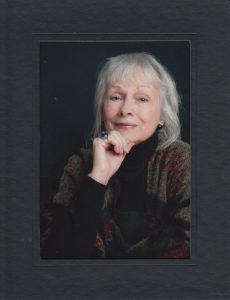 Maggie Wadey is a novelist and screenwriter. Her mother was born in Puckane, County Tipperary, while her father was English.   Much of her childhood was spent abroad, in Egypt, Cyprus and Malaya.

Her first novel Sleight of Heart was published in 1975 and she has since had a career writing for television, both original screenplays and adaptations, including Northanger Abbey and Mansfield Park.

In 2016 she published The English Daughter, a work she describes as a memoir of her mother and of Ireland.  She has just completed a collection of interconnected stories Eros in Blue.

Maggie Wadey will be reading from her work and in conversation with local historian, Danny Grace, at Nenagh Heritage Centre on Friday 4 October.