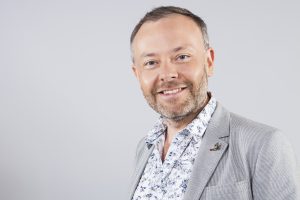 Rick O’Shea has been a broadcaster with RTÉ since 2001, previously on RTÉ  2FM and as a presenter of RTÉ Radio 1’s The Poetry Programme. He currently presents weekday mornings on RTÉ Gold.

He runs The Rick O’Shea Book Club (Ireland’s largest with over 26,000 members), hosts events and public interviews at book festivals all across the country, and has been the National Patron of Epilepsy Ireland since 2006.

He is also a Book Ambassador for Easons, compiling the “Sinead And Rick’s Must Reads” lists 4 times a year with writer Sinead Moriarty.

Rick has been curator of the Waterford Writers Weekend and was one of the judges for the 2018 Costa Book Awards in the UK.

Rick will be in conversation at Nenagh Arts Centre on Friday 4 October with Anne Griffin and John Boyne.